For seven years I had been praying to hear from the Lord strongly again.  I just felt like I was in the desert.  After moving to a new state, having five kids in six years, and a full-time job, I was just in need for some rejuvenation.  I had just started to wean my one-year old twins, and I went to bed for the first time without a bra.  For some reason, my husband was feeling frisky, and several minutes later, he found a golf-ball sized lump in my right breast.  I immediately started to cry as fear overwhelmed me, but as the week went on, and I did a little research, I quickly was comforted by the fact that 8 out of 10 lumps are benign.  But as I sat on the ultrasound table at Betty Ford Breast Center, I could see that my lump was not a fluid-filled cyst, and when she said, “I’m just gonna take a look around,” and headed towards my lymph nodes, dread came over me.  See I had mistaken this “lump” for a clogged milk duct nearly nine months before, and as a busy nursing mom of twins, I had just forgotten about it.  This lump turned out to be grade 3 triple negative breast cancer and a 6 cm. tumor.

Miraculously, all the initial body scans came back clear.  I started five months of chemo (Adriamycin and Cytoxan for four treatments and then Taxol for 12).  The first two chemos made me very, very sick, and Taxol lowered my baby white blood cells to .1 for many weeks so I was refused treatment.  I then had a right mastectomy with plans for radiation to follow and then six months later to take the left breast and start a FLAP reconstruction.  However, I had one centimeter of tumor left after the neoadjuvant chemo, so they decided to do six rounds of Xeloda.  It was at this time that two out of three doctors informed me that I likely had cancer in my lymph nodes, but they missed it in an initial scan.  After two rounds of what is supposed to be a relatively “easy” chemo, I spent 11 days in the hospital because the chemo had destroyed the lining of my small intestine, and the side effects were horrible.  So I applied for an immunotherapy trial, but didn’t get chosen.  Next I started six weeks of daily radiation.  I have a little over three weeks to go now.

Through everything the hardest things has been losing my breast and the implications of going through chemically induced menopause.  However, this journey has been amazing.  Through the suffering, I have grown so close to God, hearing Him speak clearly to me for the first time in many years.  He has done miraculous things for me, and has shown his outrageous love for me through so many people.  I am so thankful for the perspective this suffering has given me, and I wouldn’t trade it for anything. 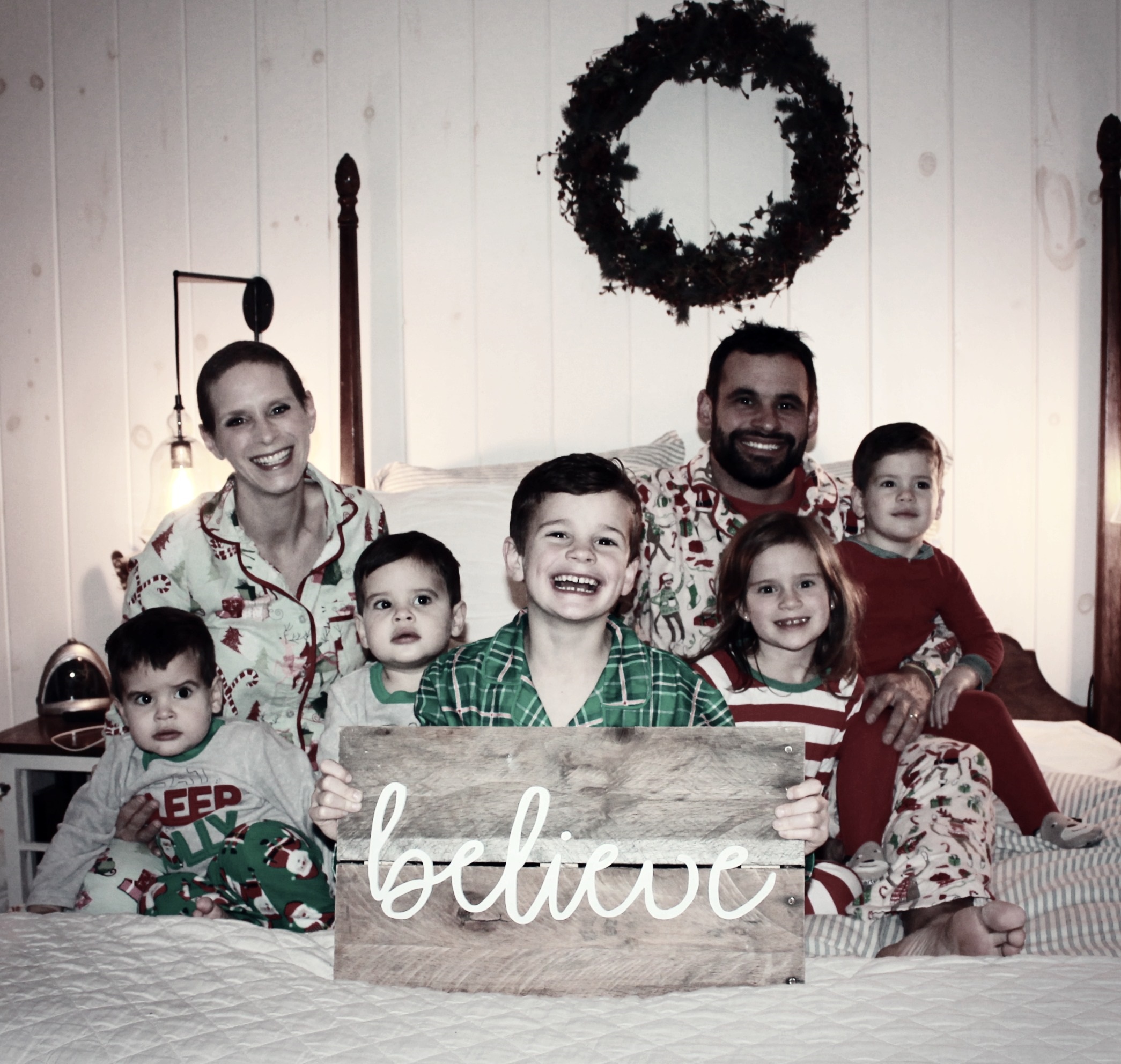 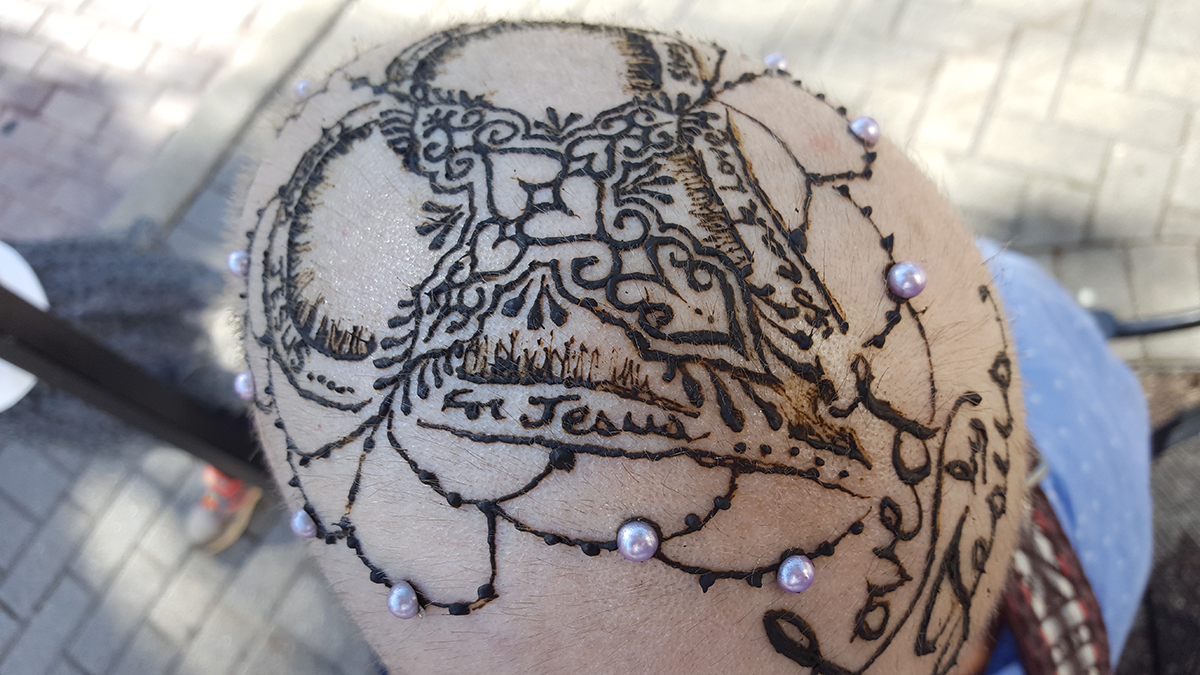 Every year my husband and I try to take each of our five kids on a special “Mommy-Daddy-Daughter/Son Date”.  This time, it was my year-old daughter’s turn.  She is an art nut, so we decided to make a special trip to Art Prize 2017.  I had seen some publicity about the different exhibits, and even though we were wearing down, I insisted that we make it to DeVos Place to see “Crowns of Courage”.  I was in the midst of chemo at the time, and I was inspired was the artists had done for these women and struck by their beauty at a time I wasn’t feeling too beautiful.  When we walked by the exhibit, I saw Steve doing some henna on his hand, and I jokingly asked “Hey, wanna do that on a head?” as I pointed to mine.  I was shocked when he said, “Sure!”  … What an EXTREME, HUGE BLESSING I received that day.  I pulled off my wig and shoved it in my purse and was crowned.  Earlier that morning I had prayed for “courage” at the altar during church.  Courage to do what God wanted me to do, whatever it be.  Who would have thought that later the day, I was given a crown of courage, in which Steve and Amanda designed to say “Loved by Jesus” in giant, beautiful script on the back of my head.  My henna tattoo stayed on for over FOUR WEEKS!!!!  I never wore my cap.  It truly stayed so long that it was only covered by my hair growing back.  What a gift I received.  What an honor it was to carry the name of Jesus on my head in such a beautiful way and to testify of the Lord’s great unfailing love for everyone! 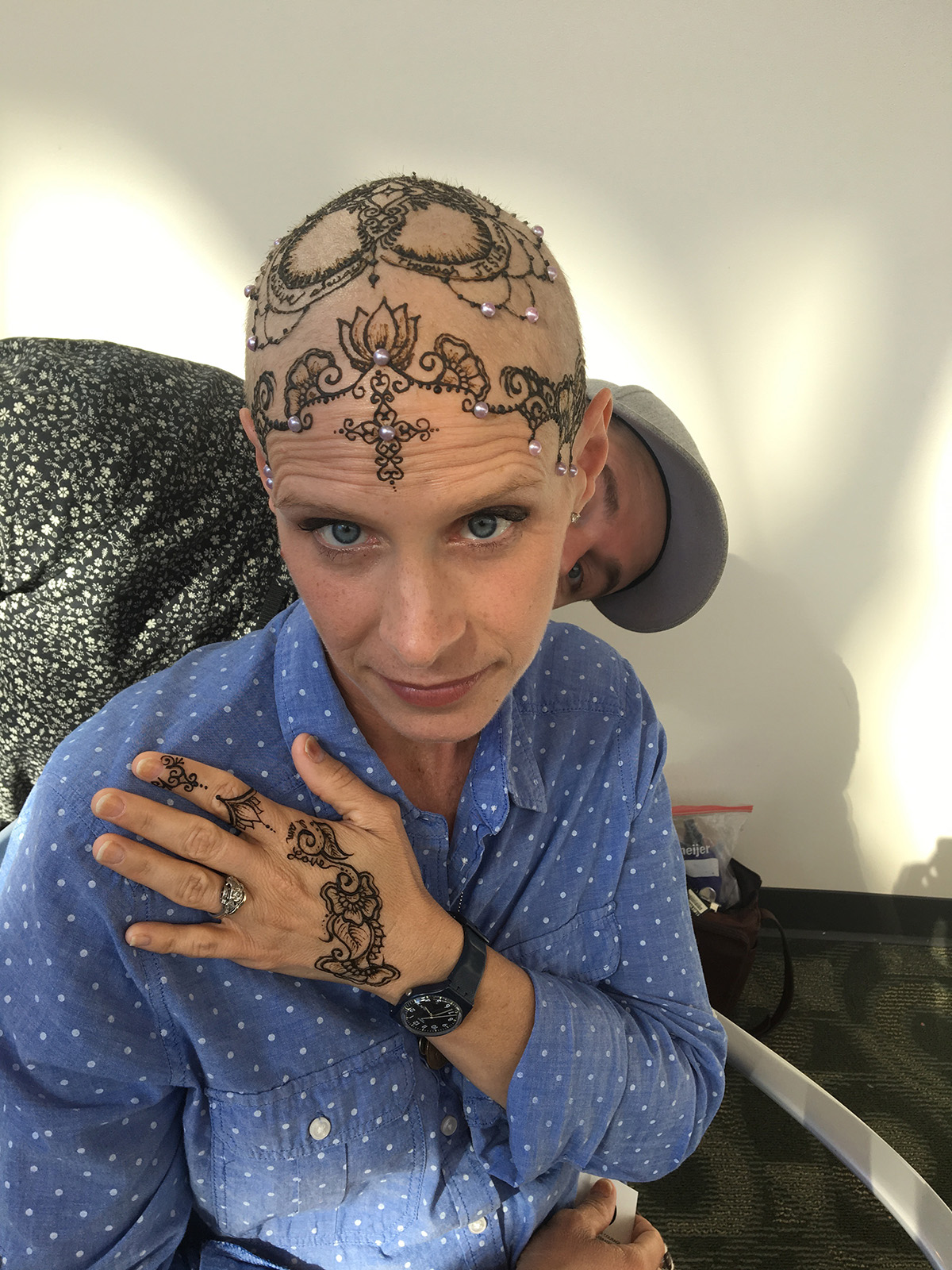